Step by step - Learn how to use axaio products

How to setup hot folder based processing

MadeToPrint Auto, available for Mac and Windows, is a plug-in for Adobe InDesign. The Auto function – already part of the Standard version – requires and special license to be activated.

You will find more information about configuring Output Jobs in chapter 2 Setup and run MadeToPrint of this manual. This chapter contains information on how to setup hot folder based automation from within MadeToPrint Auto.

MadeToPrint Auto provides exactly the same scope of functionality as the Standard version supplemented by the option of processing documents through hot folders.

The area Auto in the main dialog of MadeToPrint Auto has been designed to set up queues and to Start hot folder based processing. 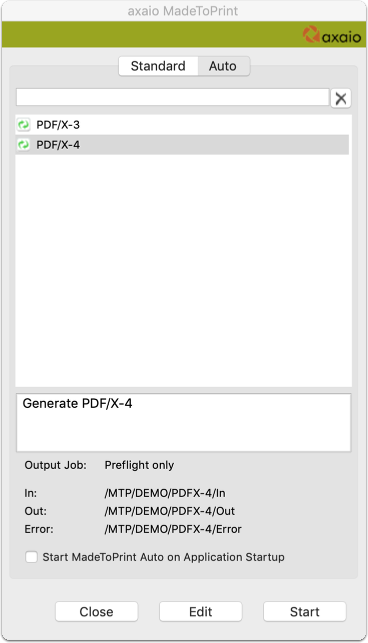 Using the MadeToPrint option Run MadeToPrint Auto on application startup in the Run Mode, ensures that MadeToPrint is ready for use right after system restart.

Using the setup dialog Auto Jobs can be created, duplicated or deleted. The following options are available:

Specify a name for each Auto Job and define whether the Auto Job is active and whether the queue is to be monitored automatically after starting MadeToPrint Auto. 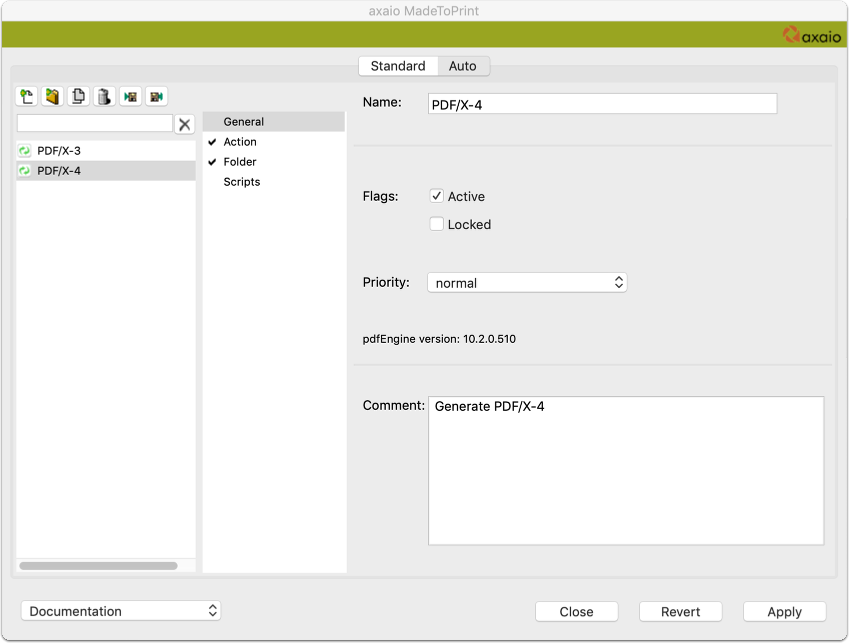 The Priority popup allows you to define up to five different priorities for the different hot folders. Jobs for archiving can thus be given a lower priority to ensure that more important PDF production jobs are completely finished first before using the processors for less important jobs.

If you want to Process documents, all MadeToPrint jobs defined under Standard are available in the popup menu. As option, you can Save changes to modified file by enabling the appropriate checkbox. 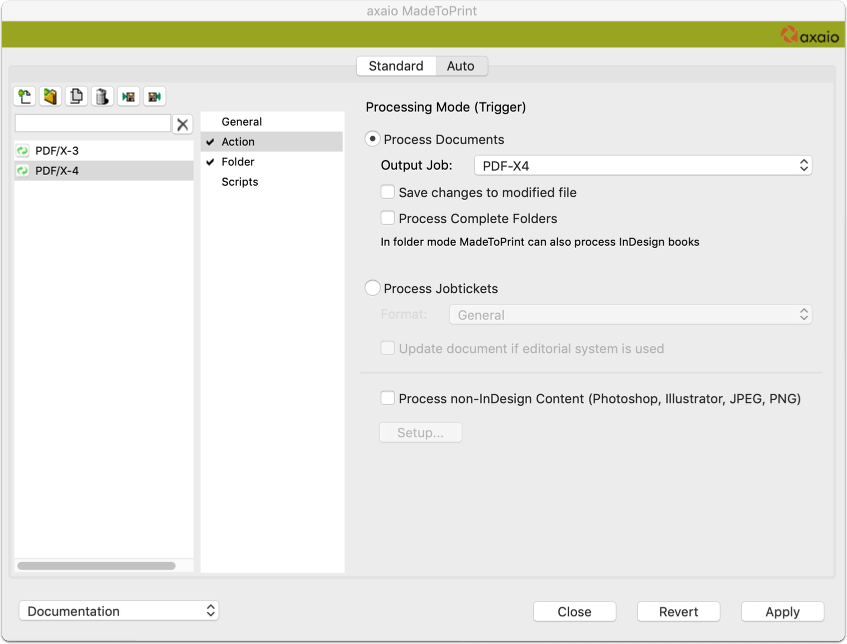 The Packages mode only processes folders in the hot folder. However, InDesign files at the topmost level are not considered. 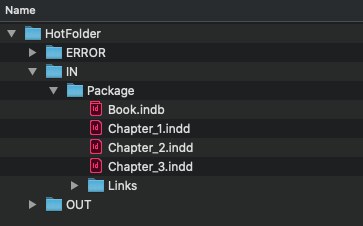 Die function Process non-InDesign content (Photoshop, Illustrator, JPEG, PNG) allows to process PSD, AI, JPEG and PNG files. MadeToPrint will pick up those input files, create a new InDesign file and place the input onto that InDesign file. From there on, the generation of output is as if the input were an InDesign file.

In this area, queues for Auto jobs can be defined. IN (the folder which is monitored constantly for incoming documents), OUT (where documents go which have been processed successfully) and ERROR folder (for documents which could not be output) are necessary to process InDesign or XML documents.

The Turbo button will automatically create all necessary hotfolders. The Scan interval determines the time intervals for monitoring the queue. Ticking the checkbox Process documents rotational allows a load-balancing. This features requires at least two MadeToPrint Auto plug-ins monitoring the same IN folder. 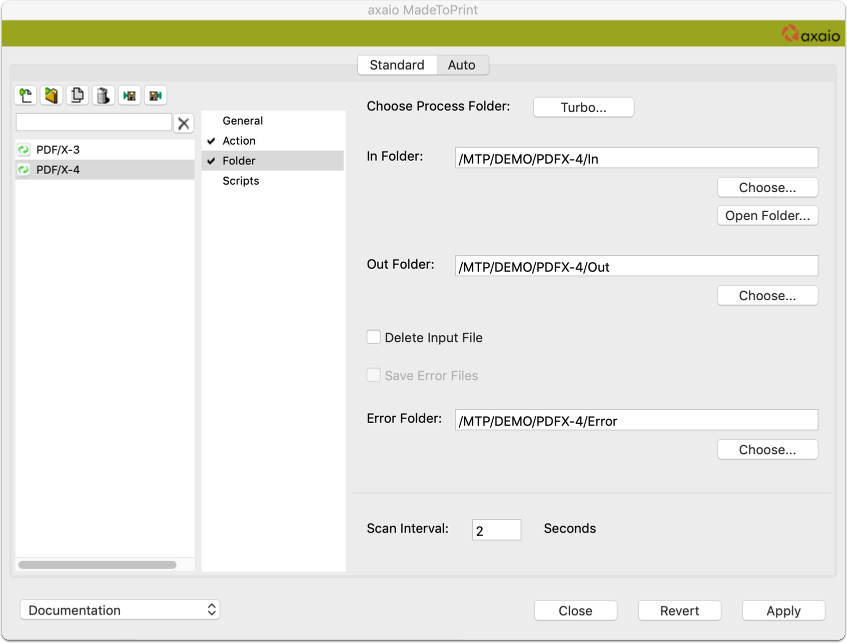 Each Auto Job needs separate IN/OUT/ERROR folders, which can be located anywhere within a network. There is no limitation regarding the number of process folders.

MadeToPrint Auto for publishing systems supports either vjoon K4, Woodwing SCE/Enterprise or Van Gennep PlanSystem4 as InDesign based editorial workflow systems. The integration of MadeToPrint into these systems allows status or task-controlled output, which means that by altering a document status or task, output will be automatically initiated.

By using MadeToPrint Auto for publishing systems, users can process jobtickets generated by K4, SCE/Enterprise or PlanSystem4. The format can be selected in the window Edit; Auto; Action under Process Jobtickets.

When using MadeToPrint in conjunction with editorial systems, information from within these systems can be used and evaluated through tokens.

PLANSYSTEMMETADATA and JOBTICKETMETADATA as tokens, information like on publication, issue or editor can be picked up by MadeToPrint and be used for naming output files.

If you have further questions you can contact our support at support@axaio.com.

You can find additional information about our optional support and maintenance agreement here.